Can You REALLY Make Money Blogging?

7 Things I Know About Making Money from Blogging

Can You REALLY Make Money Blogging? [7 Things I Know About Making Money from Blogging]

Every now and again I am pulled aside at a conference or am emailed and/or tweeted by someone wanting to get the “real” scoop on whether it is possible to make money blogging.

I completely understand the questions and would probably want to add one more:

I’ve written many times on ProBlogger about this in the hope of giving a realistic picture of the topic, but I think it is worth touching on again because there is a lot of misinformation out there right now.

On one hand, we see hype on the topic. Periodically someone will claim to be able to make millions from blogging quickly. These claims are usually accompanied with the release of a product or service (i.e. they are marketing spin).

On the other hand, I periodically see people writing about how it is impossible to make money blogging (or that anyone claiming to be full time is either a scammer, a liar, or is selling something on the topic of making money online).

The reality is somewhere between these two extremes.

Here are 7 things I know about making money blogging

I’ve been blogging for just under thirteen years and for twelve of those I’ve been making money blogging. It started out as just a few dollars a day but in time it gradually grew to becoming the equivalent of a part-time job, then a full-time job, and more recently into a business that employs others.

I used to talk about the specific levels of my earnings when I started ProBlogger but felt increasingly uncomfortable about doing so (it felt a little voyeuristic and a little like a big-headed boasting exercise and I didn’t really see the point in continuing to do it) — but my income has continued to grow each year since I began.

On some levels I was at the right place at the right time — I got into blogging early (in 2002 … although I felt I was late to it at the time) and have been fortunate enough to have started blogs at opportune times on the topics I write about.

However I know of quite a few other bloggers who make a living from blogging, many of whom have not been blogging anywhere near as long as I have.

For some it is a hobby that keeps them in coffee; for others it is the equivalent of a part time job/supplementing other income from “real jobs” or helping their family out as they attend to other commitments (raising a family). For others it is a full-time thing.

I’ll give you some examples below.

2. There is no single way to monetize blogs

Recently at our ProBlogger event I featured numerous Australian bloggers in our speaker lineup who fit somewhere in the part-time to full-time spectrum. They included:

The year before, we had others, including:

Most of these bloggers are full-time (or well on the way to being full-time bloggers). They come from a wide array of niches and all monetize quite differently — doing everything from selling advertising, to having membership areas, to selling ebooks, to running affiliate promotions, to promoting their offline businesses, to selling themselves as speakers, to having book deals, and so on. Many have a combination of different income streams.

They are all also Australian, and are just the tip of the iceberg in terms of what is happening here in Australia — the same thing is being replicated around the globe.

There are many ways to monetize a blog. To give you a quick sense of the many methods check out this “money map” I created a year or so back, which outlines just some that I brainstormed (get the large version here). 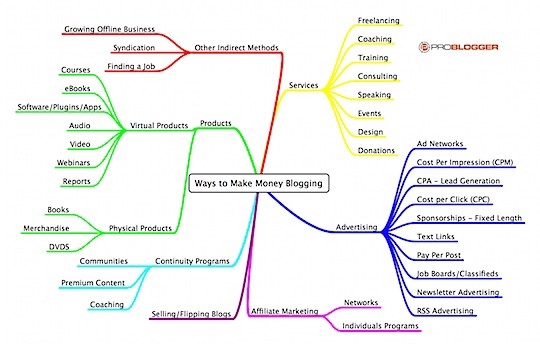 I also recorded this free hour-and-twenty-minute webinar giving an introduction to the topic.

3. There are no formulas

From time to time, people have released products that claim to be formulas for success when it comes to making money online. They outline steps to follow to “guarantee” you’ll make money.

In my experience there is no formula.

Each full-time blogger I’ve met in the last ten years has forged their own path and has a unique story to tell. They have often acted on hunches and made surprising discoveries along the way.

There are certainly similarities in many of the stories but each blogger has their own personality and style, each one is reaching a different audience, and each niche tends to monetize differently.

The key lesson is to be aware of what others are doing and to learn what you can from each other, but to also be willing to forge your own path as well!

One common critique of the topic of monetizing of blogs is that the only people making money from blogging are the ones writing about how to make money blogging.

This is simply not true.

In the above list of speakers from our Melbourne event you’ll notice I included topic/niche of each blogger. None sell products teaching others to make money blogging — all are on blogging on “normal,” every-day topics.

My own experience of having a blog about blogging (ProBlogger) and a blog about Photography is that it is my photography blog that is by far the most profitable blog (I’d estimate it’s ten times more profitable).

I’ve interviewed numerous full-time bloggers of late in a webinar series including:

5. Most bloggers don’t make a full-time living from blogging

Every time I’ve surveyed readers of ProBlogger about their earnings, we’ve seen that those making money from blogging are in the minority. 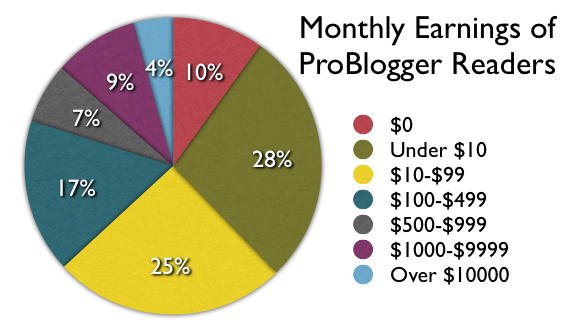 Keep in mind that ProBlogger readers are generally newish bloggers — about half of those who took this survey had been blogging for less than two years.

Let’s be clear — most bloggers who are attempting to make money are not making a living from blogging.

My feeling, having been attending blogging conferences for six or so years now, is that the number of full-time bloggers is on the rise, and there are actually quite a few more people now at least making the equivalent of a couple of days’ work a week in income from their blogs.

6. It takes time to build

When I dig down into the stats from the survey on income levels above, and do some analysis of those who are in the top income bracket, it is fascinating to look at how long they’ve been blogging.

This certainly was my own experience. I blogged for a year without making money and once I started monetizing it was around two years of gradual increases before I approached a full-time income level. It would have been four years before I joined that top bracket of income (over $10,000 per month).

Blogging for money is not a get-rich-quick thing. It takes time to build an audience, to build a brand, and to build trust and a good reputation.

And of course even with four or five years of blogging behind you, there’s no guarantee of a decent income.

Longevity is not the only key to a profitable blog. The other common factor that I’ve noticed in most full-time bloggers is that they are people of action.

Passivity and blogging don’t tend to go hand in hand.

Blogging as “passive income stream” is another theme that we hear in many make-money-blogging products, however it is far from my own experience.

I’ve worked harder on my business over the last ten years than I’ve worked on anything in my life before this. It is often fun and gives me energy, but it takes considerable work to create content on a daily basis, to keep abreast of what’s going on in the community, to monitor the business side of things, to create products to sell, to build an audience, and so on.

The key is to build blogs that matter to people, that are original, interesting, and helpful. But this doesn’t just happen — it takes a lot of work.

Yes, it is possible to make money blogging. There is an ever-increasing number of people making money from blogging at a part-time to full-time level — however they are still in the minority.

Those who do make a living from blogging come from a wide range of niches, however one of the most common factors between them is that they’ve been at it for a long while.

Want More? Check out the podcast version of this post here.